Double Diamonds My very first attempt. Well ok.. technically it’s my second attempt.. for my first attempt I decided that “this tablet weaving stuff looks easy.. I want to do double faced” and so I did a quick 2-2 warp of black and white. After a night of turning it and getting no where I un-did all the turnings and stared at it for a couple more days. Finally I saw this pattern. It looked like it’d be a nice easy way to ease into tablet weaving…. That and I’d be able to use the threads I already had on my loom.

Anglo Saxon Threaded in pattern I’d actually read Thora’s article many times.. and although it looked kind of interesting.. I wasn’t thrilled by the sample she had up on her site. It was nice but it didn’t make me go “Ohhhh!!! That one!!! I must have it.” Then I stumbled across this other sample on Eve’s web page. -That- one got the “must have it” response.
Katie’s Trim Ok, many things at work here. I showed my tablet weaving to a couple of people at the Shire and Katie and Dianora decided that they wanted to try it. At the last Collegium I picked up an extra inkle loom for $5. So we used Gutram’s Tablet Weaving Thingy to work up the pattern. We warped up the little loom and started to weave it.. (insert pain, suffering and curse words). First off the pattern was coming up on the under-side.. so we pulled it off the loom.. reversed it.. and then we couldn’t get it to work for love nor money. After a frustrating time Katie left with the little loom…. and I just fumed and tried to figure out what went wrong. It turns out that Gutram’s tablets are lettered counter clockwise. My cards are lettered clockwise… so if I follow his patterns exactly I always end up with the pattern on the bottom of the band. To fix this I changed all the S’s to Z’s and all the Z’s to S’s. It worked like a charm and I wove up a test patch of Katie’s Trim.. and gave it to her.. so I don’t have a sample to scan.

Dad’s Belt This project is the whole reason I got started with tablet weaving. When I was growing up my Dad had this belt. He loved to wear it.. in fact he wore it until it got so worn and dirty that he couldn’t wear it anymore. So he went looking for another belt just like it. Nowhere could he find the same type of belt but somehow Mom found out that it was tablet woven. This was years and years and years ago.
So we’re coming up to Dad’s birthday this year.. and I’ve just started tablet weaving. While talking with Mom I ask her if Dad still has that belt he really liked.. and Gee could she send it to me. So I worked out a pattern based on the original.. and made it. I hope he likes it. 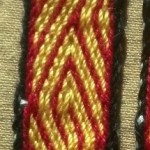 Red Yellow Missed-Hole Tablet Weaving Spiral This project is my first attempted at a band using missed-holes. This will be trim on one of Fearghus’ tunics.

Knighting Tunic Trim This is by far the most complicated tablet weaving project I’ve ever done. In total I completed 8 repeats of the pattern though I think I only ended up using 5 of them. Each pattern repeat took about 6 hours to weave.. so in totaly I had 50 hours of weaving in this project. 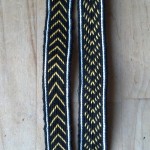