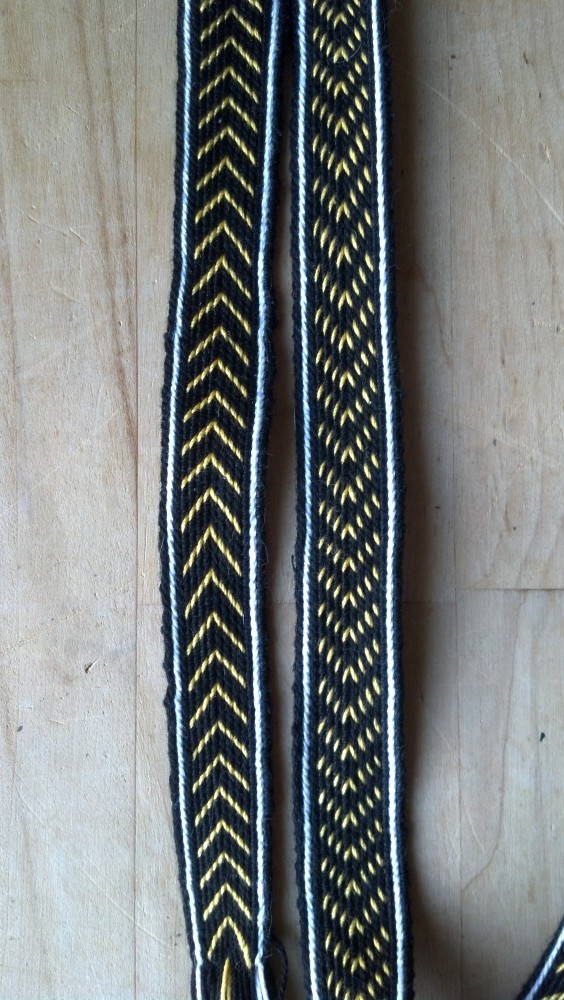 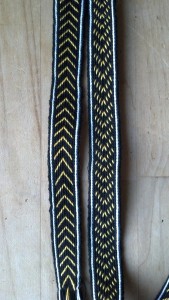 On Friday my love reminded me that on Sunday we would be helping with a demo in town.. and that “people really like to see things being woven on a loom” and asked me to have a project ready for the demo. I needed something quick (so it would be warped up and ready-to-weave in less than a day), simple (I expect to have to start/stop a lot in the middle of weaving as I explained things and I also expect to let children and parents try it out so simpler is better) and beautiful (Well duh, beautiful weaving is more alluring then f-ugly weaving).

Project Summary:
Thread is size 10 cotton crochet yarn. This used 8 pattern cards (yellow, black, black, black) and 3 border cards on each side (solid black, solid white, solid black) setup according to threading diagram to the right. For a total of 14 cards used to weave this.

The weft is size 10 cotton crochet thread in black.

This was woven on my simple board loom.

Turning Sequence:
All cards are turned forward for the whole band.

Comments:
I’ve been toying with a plan to make a really narrow band with diamonds on it as trim for a coat for Her Highness of Cynagua. I quickly played with GTT (http://www.guntram.co.za/tabletweaving/) and generated a simple pattern which would make diamonds when turned 4F-4B. It was simple, easy and should go very quickly.

I setup my warping board and got a 5 yard warp setup. I had thought that I’d be able to use the size 10 cotton crochet thread I normally use.. but split it into it’s three plys to get a narrower final band, but as I started trying to split the crochet thread I found out that it was very fragile when split into its separate plys..the threads broke if I breathed on them funny… so I decided to just use the normal size 10 crochet thread. The pattern is 8 cards wide with 3 border cards on each side for a total of 14 cards used for this weaving.

So I warped it up, put it on the loom and started turning all forward to establish a firm header and get some good tension. Turning the pattern all forwards resulted in some really lovely chevrons. They were even, smooth..just beautiful. After I had the tension I wanted on the loom I started doing the pattern of 4F-4B.. and found out that I -really- did not like the way that looked. Because of the reverse in turning the pattern bubbled badly around the turning points and just didn’t look nearly as nice as the all-forward turning looked. I toyed with the idea of turning the border cards all forwards and just reversing the pattern cards.. but since this was for a demo and I expected kids to try it out for themselves I wanted to keep the weaving as easy as possible.

So I changed my mind. Instead of making little diamonds I was going to do chevrons and just deal with the twist build up.

Because the cards are turned all forward the twist builds up until I can’t turn the cards any more. When that happens I lock down the cards (with a safety pin) and individually untwist each of the cords. I have about 24 inches of unwoven warp exposed.. and then the threads on each card are butterflied up into a bundle which is suspended off the end of my board loom. When I undo the twist I simply release the warp from the loom and spin each of these cord bundles until the twist is gone.

The band itself is weaving very quickly. In fact it’s the untwisting that takes the most amount of time. I finished 25% of the band by Sunday night. 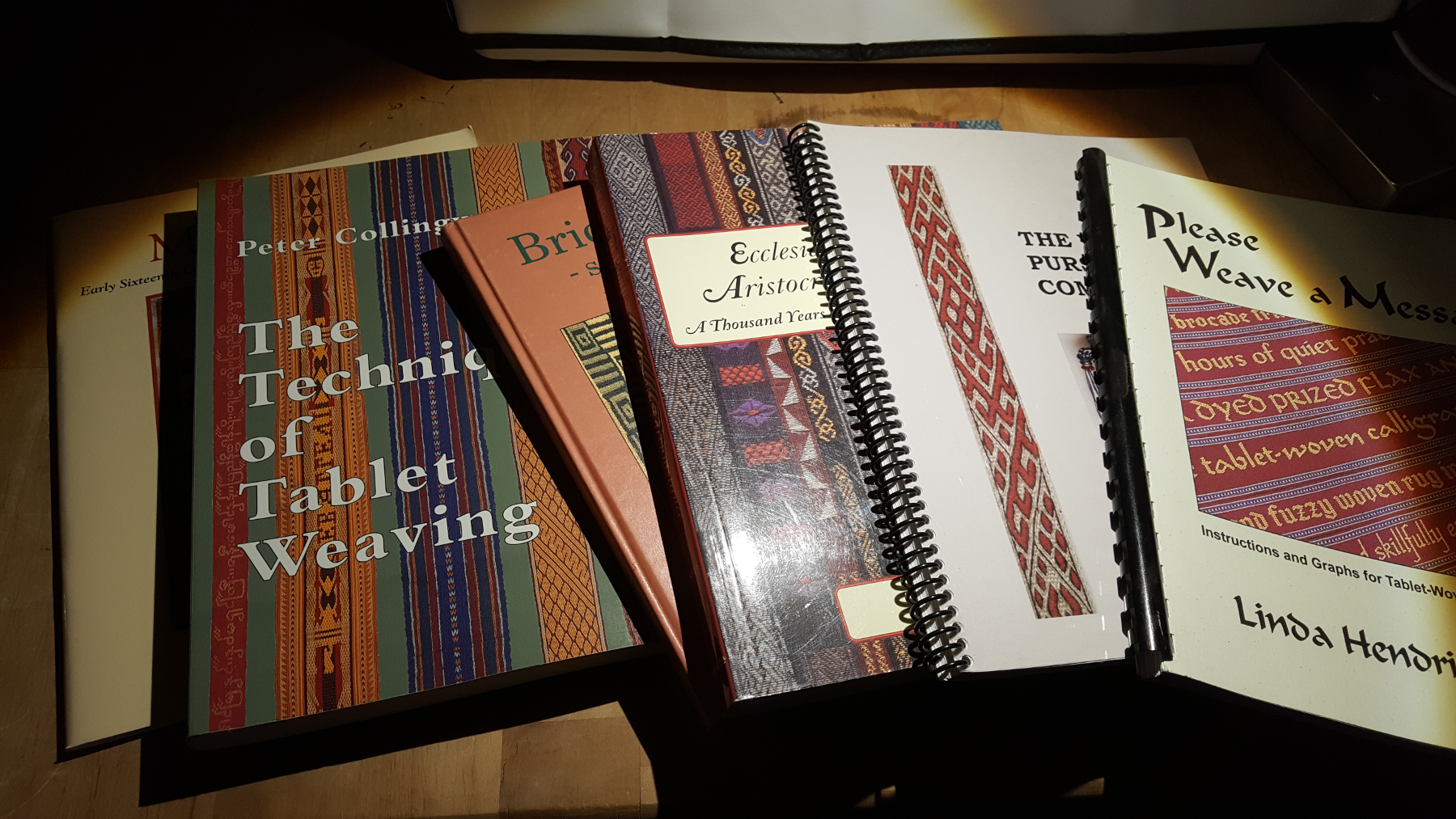 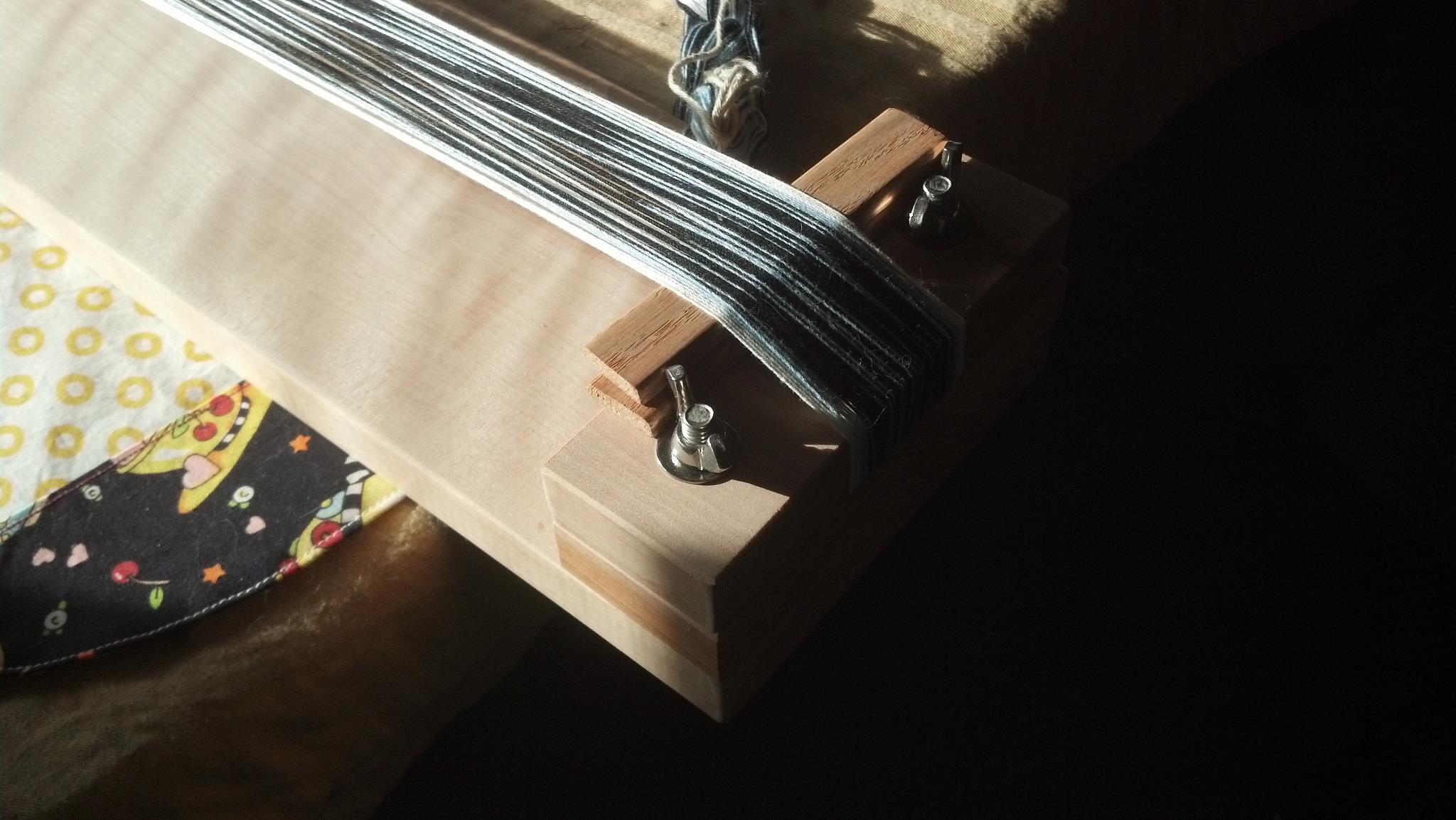 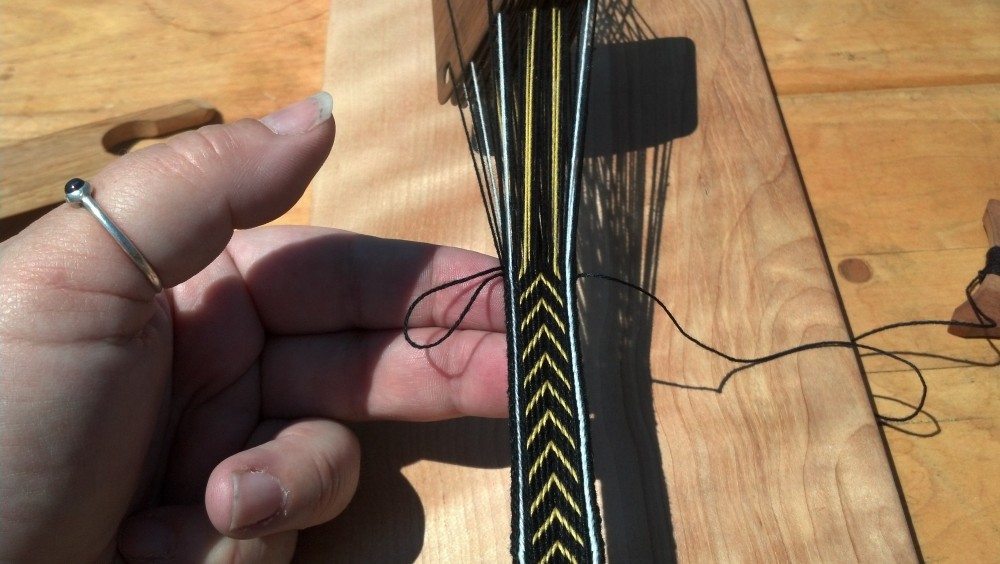