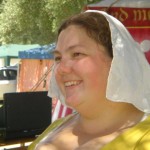 Well ok, no it’s not. I play in the SCA as Mistress Sylvie la chardonnière. I’ve played in the SCA since 2002.  I started out in the West Kingdom and then moved to Atlantia in 2021.  I’ve cooked several feasts and autocratted several events. I live in the Barony of Nottinghill Coille (Chester, SC) with my husband Sir Fearghus MacAirt, son Erik Stormbringer, and a dog (Freya).  I was laureled for “all the things” (that’s what the King said) at West Kingdom Golden Beltane (2016) and received my Pelican at the Mists Coronet won by Helga (May, 2022). Lately I’ve been researching late period tailoring techniques, the Luttrell Psalter, 14th century fashions and medieval dye colors. Friends would describe me as intense. Acquaintances will describe me as intimidating.

There’s power in the naming of things:

When I finally decided that having an SCA name was the thing to do.. I decided I wanted to be French. I adore French accents and being French seemed to be the epitome of being medieval (being English would have been boring). At the time my HR representative at work was French.. her name was Sylvie. So I totally stole her first name.
At the time I was also very fascinated with thistles. The flower is pretty and prickly. Thistles are the same family as artichokes (which I adore) and capers (NUM)! The French word for “thistle” is “chardon”. I did try and register Sylvie de Chardon (Sylvie of the Thistles) but the heralds were having none of that. After casting about for a while I stumbled upon “la chardonnière” (the thistle seller. A feminine surname from 1200s) and went with that.
Flieg has said that he believes that the reference I found to document “Sylvie” is probably a misspelling/typo/sloppy-handwriting of “Sylvia” .. but it’s documented. Also “la chardonnière” is specifically NOT capitalized because that’s how it was in the documentation (FB does not pay attention and refuses to list it in lower case). 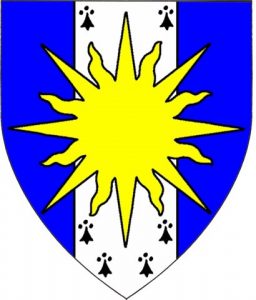 My arms: Azure, a pale ermine, overall a sun Or.
In layman’s terms: Blue (azure) background with a stripe of ermine (white with black spots) in the middle running top to bottom with a gold sun on top of everything.
Why: When I started designing my device I knew I wanted something iconic that I could easily draw on everything I owned (Honestly a gold sun? what is more iconic?). I also wanted blue because blue is my favorite color (sapphire actually) and gold because it looks “warmer” with blue than white does. I ended up with the ermine stripe because for some reason a lot of groups and people have already registered practically every variation of a gold sun on a blue background and because ermine SCREAMS medieval to me.
I’m also tickled by the cant of my device.. “on a pale ermine” just tickles my fancy because I can totally picture someone riding an ermine(part of the weasel family) into battle.
When it was registered (12/2004) I was required to have at least two points of difference between every other device. Flieg called my device a “very careful parking job” as it was exactly 2 points away from 7 other registered devices.