A while ago Coenwulf traded me a Kitchen Aid mixer for a waffenrock. For many different valid and invalid reasons this has taken a lot longer than expected. Many thanks to Coenwulf for his patience.

The body of the waffenrock will be modeled after the “Hauptman” image using black wool with burgandy speckles for the base and burgundy and gold brocade for the guards. The “noodly appendages” will be modeled after the waffe sleeves in the second inspiration picture. The fake-wam sleeves will be simple fitted sleeves made of a black and orange zig-zag fabric. A second set of undersleeves will be made up in another shocking loud orange fabric.

Normally, in period, there would be wams (a fitted doublet), shirt and hosen worn under the waffenrock. Because we live in California we decided to fake the wams by adding removable undersleeves. The faked-wams-sleeves will tie unto the waffenrock at the armseye hidden by the waffenrock sleeves.

I’m annoyed as heck that on the day that he first wore the outfit I totally forgot to get any pictures. Luckily he agreed to pose for pictures at 12th night(January 2015).

– (done) Drape the body portion to make a pattern.
– (done) Drape a fitted sleeve pattern.
– (done) Cut out wool outer fabric and linen lining for body portion.
– (done) Sew together body portion along sides and sleeve cap with 1/2″ seam allowance. All seams are enclosed between the fashion fabric and the lining fabric.
– (done) Sew 1/4″ around the armseye (flatlining) (makes the linen and the outer fabric act as one piece of fabric).
– (done) Cut out guards. The guard fabric has an “up” position so I needed to make sure to cut out all the guards so they would end up right-side up.

– (done) Attach the guards to the body portion. I didn’t want the guards to creep as I hand-sewed them down so I pinned the hell out of them and machine-sewed them down initially 1/4″ from the edge with the largest stitch my machine would do in yellow thread.
– (done) Hand stitch the body guards down and remove the yellow basting stitches.

– (done) Cut out skirt portion. It needs to be at least 20″ long to fall right.
– (done) Hem skirt portion.
– (done) Attach guards to skirt portion. I discovered a new stitch on my sewing machine. This is the first time I’ve ever “stitched the ditch”. It works surprisingly well for attaching guards and looks great. This really sped the process along.
– (done) Pleat skirt to body of the garment.
– (done) Finish the inside.

– (done) Cut out second set of removable undersleeves. (ORANGE!!).
– (done) Sew them together and add ties. 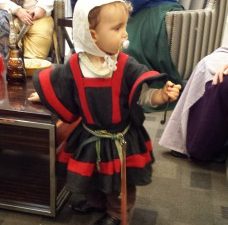