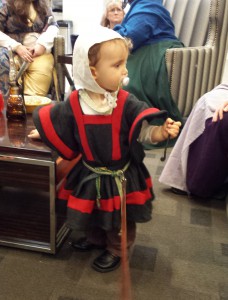 While working on the outfits for Coenwulf, Katla and Kolskegg I was repeatedly struck by how very cute it would be if I dressed my son, Erik (13 months), in a waffenrock. Especially if he were walking. As fate would have it, Erik started walking about 3 days after his first birthday November 19, 2014. As soon as that happened I knew that I would have to make him a waffenrock that matched his daddy’s waffenrock for 12th night.

Erik’s waffenrock is made out of leftover wool/linen from his daddy’s waffenrock. I barely had enough scrap left. To make the body of the garment I measured one of his well fitting onsies and added an inch or so to the width. When this was finished I had him try on the doublet portion and then measured the length of the skirt portion (10″) and added two inches to that (for attaching to the body and for the hem). All of the guards were attached with the stitch-in-the-ditch method via machine. The skirt was knife pleated into the body of the garment. I decided to go with fan sleeves as those seemed like they’d be the easiest to fit and easiest when trying to put him into the garment.

Under this we dressed him in a plain white long-sleeved onsie, some brown velvet pants and some nicely square-toed baby dress shoes (hand-me-down from my cousin’s children). With sewing brown out and all the holidays I barely had time to finish the waffenrock. I hope to sew a collared hemd for him to wear in the future.

Overall I’m pleased with the garment and hope he gets to wear it at least a couple more times. Before you ask, yes we have him on a leash. He has recently decided he wants to walk by himself without holding hands and a leash seemed like the best option for keeping him somewhat contained.