On September 12, 2013 Her Majesty Patricia contacted me to ask if I could make a Cotehardie for her to wear at October Crown (October 5). She would supply the pattern and the fabric and other materials. I agreed to make the dress for her but warned that there may not be enough time to finish the eyelets for the lace.

On September 14, 2013 I received the pattern for the Cotehardie and Her Majesty advised that the fabric had been ordered online and would be delivered to my house. The pattern is a 7 panel cotehardie pattern. Personally, I prefer a 3 panel construction but the pattern was clearly laid out enough for me to work with it.

On September 22, 2013 I started to panic. The fabric had still not arrived. On Friday September 27, 2013 (T-minus 7 days to delivery) the fabric finally arrived. I immediately washed and dried it on Friday and then cut it out on Saturday and started assembling the Cotehardie on Sunday. The dress would be made of 5 yards of grey cotton velveteen. I decided that the easiest way to construct the dress (since I don’t own/won’t use a Serger) would be to fully line all the pieces with some Natural IL020 linen I had from my stash. In order to get the dress to fit in the 5 yards I had to work with (and still have enough fabric to make the sleeves) I ended up having to tessellate the back pattern pieces so they were laid out the opposite direction from the rest of the dress. In most lights this is not noticeable on the cotton velveteen.. but occasionally from the back the center-back pieces will “flash” a lighter or darker grey than the rest of the dress. I intentionally isolated the “flash” to only the back of the dress to minimize the distraction.

On Monday I finished most of the construction seams. For this dress I used the fully enclosed stitch and flip method for attaching the pattern pieces and the lining.

On Tuesday I hand-finished the neckline and the placket for the lacing.

On Wednesday we went out with a friend to celebrate his birthday and nothing got done on the Cotehardie.

On Thursday I brought the dress with me to work and had Patsy visit me in my office to try it on. We marked the hem and tried out the sleeve on the dress. Sadly, I’m a dufus (and the sleeve had no markings) and I fitted the sleeve into the armseye incorrectly so to my horror it looked like the sleeve pattern would make it so she could not lift her arms above chest height. That night I had a friend Ashlee, Patsy’s body double, come over and I fiddled with fitting the sleeve to her enough to figure out that the issue wasn’t the sleeve pattern.. the issue was my understanding of how the sleeves attached to the garment. So later on Thursday night I cut out and attached the sleeves CORRECTLY.

On Friday I hand hemmed the dress and made the tippets. The tippets are temporarily stitched to the dress but they can be removed for cleaning. I arrived on site at 9:30pm and handed the dress off to Her Majesty.

On Saturday morning I sewed Her Majesty into her dress. Her Majesty had made the lower sleeves herself from some silk(?) from her own stash.

Not bad for a 6-day dress. Ideally in the future I’d really like to have a least two weeks start to finish to work on this kind of dress.. but it’s nice to know I can get it done in a week if I really push it.

[Edited to add:]
In January 2015 Patsy gave the dress back to me and I added eyelets to it. 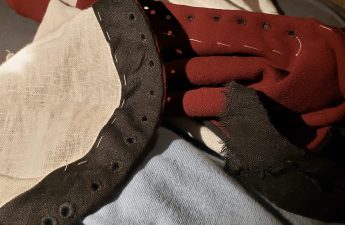 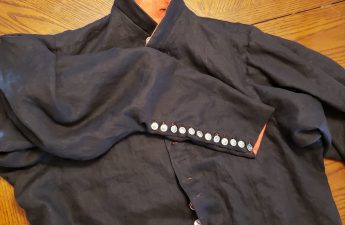 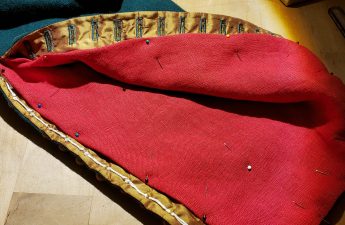