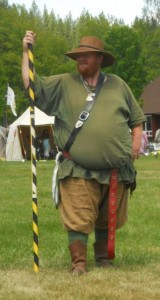 This pattern is for a 3x-4x man. These require ~4-5 yards of modern width fabric (You can squeeze them out of 4 yards if it’s at least 52″ wide, otherwise, 5 yards). I’ve made them with medium to heavy weight linen. I think these would also work well made from light to medium weight wool. 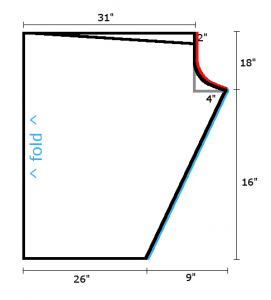 These can easily be sized up or down. I’d leave the upper legs the same fullness. Change the waistband to be waist size +5 inches. Then simply re-draft the upper-leg crotch arc to match the rise of a pair of jeans that fit. Then shrink the width of the lower leg so that it’s just wide enough to go around the calf at it’s biggest measurement.

These can be made without a waist-band. In that case I’d add ~3″ to the top of the upper leg pattern and roll that over to hold the drawstring. In practice I’ve found that the pants are more comfortable (and easier to manage in the priv) if they include the waist band and pleat the pant legs into the waist band. The pleating also has the potential of hiding a pocket if you want to add one.

You could probably update the pattern to make the legs from a single piece of fabric by extending the leg down another 14″. That would actually eliminate some of the pleating and make these a bit easier to sew.. but as it is, the lower leg piece is precisely sized to exactly fit around My Lord’s calf. This means that even without wickerbander he can keep the pants at knee level. Regardless, please yourself.

In sewing this together I have used french seams (1/4″ SA and then 1/2″ SA) to limit the amount of surface stitching seen on the garments. You could do this with flat-felled seams.. or I suppose you could surge it and then sew it together that way. Please yourself.

Note that the front of the upper-leg piece is 2″ shorter than the back and is cut at an angle.

How I put these pieces together:
1. French seam each lower leg piece into a tube (10″ wide by 16″ tall).
2. French seam the upper legs together front and back(marked in RED on the pattern). This is the rounded “crotch” seam. Make sure you’re seaming the right front to the left front.. and the right back to the left back.
3. French seam the upper legs closed (marked in BLUE along the length of the leg, up one leg and down the other). Press the crotch seams in opposite directions.
4. Line up the lower leg with the upper leg so that the seam is on the back of the leg. Using “divide and conquer” starting at the back seam, knife pleat the upper leg to fit the lower leg. Push the knife pleats to one site (I like to go one way on one leg.. and the the opposite on the other leg). French seam the pleats in place. This also attaches the lower leg to the upper leg.
5. Hem the lower leg.
6. French seam the waist band ends to make a ring.
7. Add two button holes in the front inside of the waist band. I add these on either side of the seam. These holes will be used to pull the drawstring out of the waistband so you can tie the pants tightly on the inside of the pants. Alternatively you could add belt loops.
8. Line up the seam on the waist band with the center front of the pants. Divide & conquer knife pleats around the waist band. Press the pleats towards the center back of the pants (allows for hidden pockets if you want to add them). Enclose the waist band (Honestly I haven’t figure out a good efficient way to do this that doesn’t leave raw edges inside for the drawstring to tangle. I’m still experimenting.).
– Currently I:
Line up the waist band so that it is inside the pants offset from the top of the pants by your seam allowance
Sew the first half of a flat-felled seam to attach the waistband to the upper leg, fixing the pleats in place.
rolling the flat felled seam towards the outside of the pants.
Add the raw edge of the waist band into the second half of the flat-felled seam. Sew this down. Be sure to tack down fabric from both the rolled edge and the folded edge of the waist band.
9. Add the drawstring to the casing. (the drawstring is in black is SKU 070659556739 from Jo-Ann’s)
10. Wear pants. 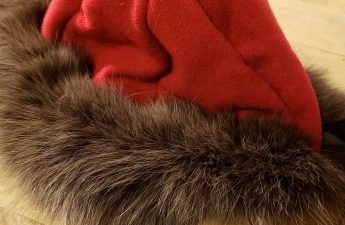