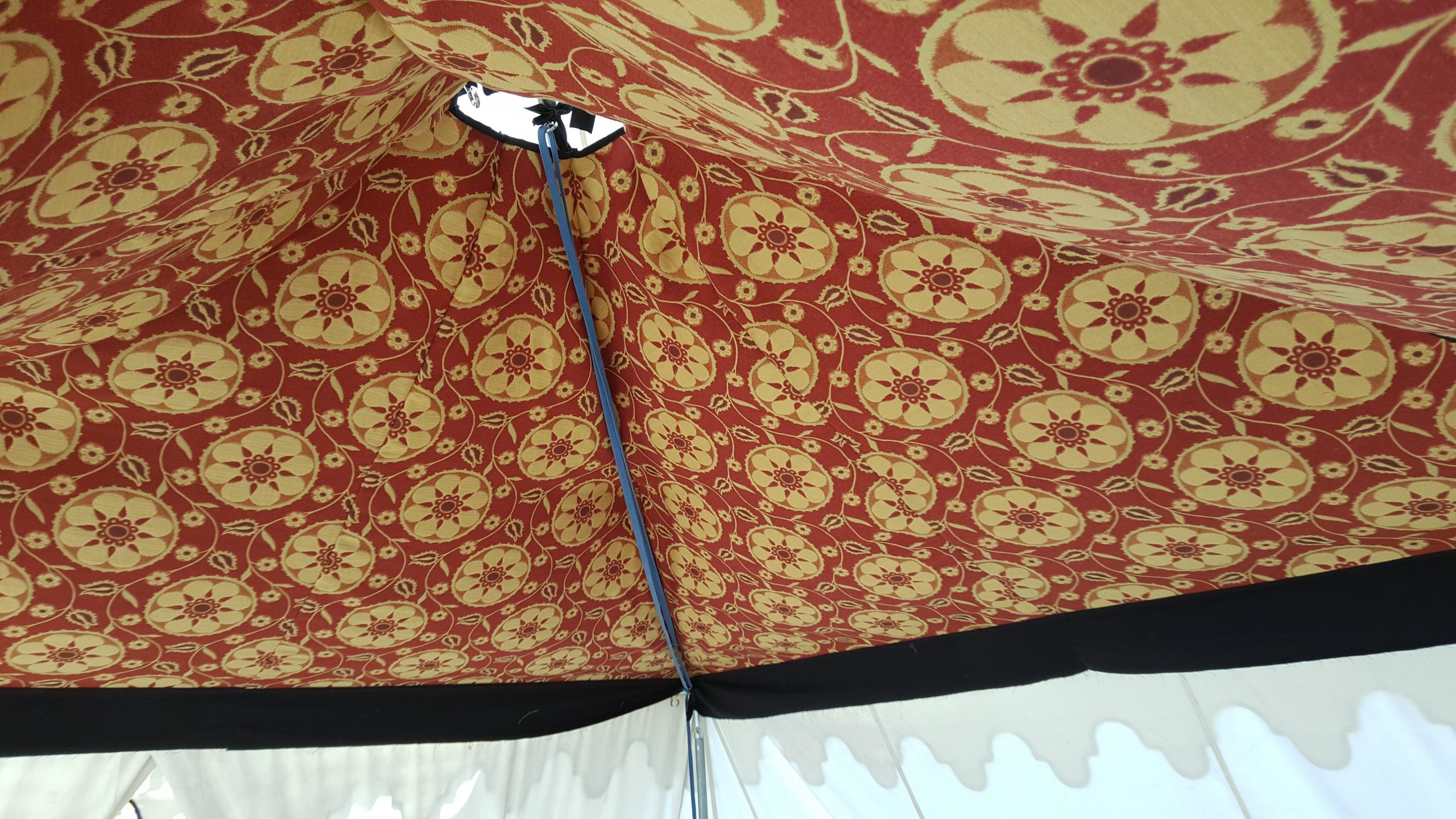 We camp in a Panter Regent (which are fabulous you should totally get one). The regent is made of white canvas. Normally it’s not a big issue but at really hot events (like June Crown events that regularly happen at 100F+) the white canvas does not cast as deep a shadow as I’d like. In fact the sun is still “beating down on you” even when you would expect to be completely shaded. This warms everything in the tent making the tent even warmer than it should be.

My theory is, if I could add a thick fabric interior to the roof of the tent then I could cast a deeper shadow inside the tent cutting down on the radiant heat. Also I think because the fabric is dropped down below the level of the roof and has a vent in the center hot air will be able to flow up into this area and the lower part of the tent will stay a bit cooler.

It’s a good theory. Good enough to try it out.

I decided to sew an internal insulating fabric layer for the top of our tent.

I’m sewing some heavy tapestry together into triangles which will be tied to the internal structure. This will both cast a deeper shadow.. and allow the heat to accumulate in the top of the tent above the fabric layer thus (hopefully) cooling the tent.

I’m a software engineer, what do I know?

I bought the fabric for $3.50/yd from a store which was going out of business in January 2016. I think I bought 10 yards. It wouldn’t work for the original project so I tucked it away in my stash. In 2017 I started on this project and then we got past the hot time of the year and it became less urgent and it got shoved to the back burner. When we re-did my sewing room I cleared out some of the stuff that was junking up the room. So this UFOs got another chance to complete.

I mathed the heck out of this and cut my fabric into triangles. The triangles were seamed up the middle (selvedge to selvedge) with a simple seam. Then I used bias tape to cover the raw edges at the bias edges. Finally I used more bias tape to make ties which we use to attach the insulating layer to the support structure for our pavillion.

We used this first at June Crown 2018. The Insulating layer was an absolute win. The event was very hot and the inside of the tent was at least 10 degrees cooler than I’d expect it to be on the inside of a tent.

Having now used this for a year I will say I wish I’d made these pieces a bit longer. I wish the insulating layer would reach all the way down to and attach to the horizontal poles. Regardless, this has been a HUGE success and I highly recommend it.