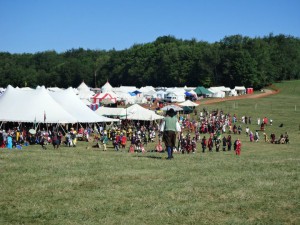 Ok. It was hot and horrible and fantastic and humbling and over-the-top and I wish I had done so much more and I’m so sore I can barely move and I can hardly wait to do it again. *gasp*

My pictures from Pennsic.

Weather
The first week was hot and muggy. Uncomfortably so. I’m very glad that I sewed up my two roman stola(stola in white) as I wore the heck out of them.

Stola: ~3.5 yards of 60″ wide linen. Sew up the cut edges to make a tube that’s ~60″ tall. Use two pins (I got mine from Raymond’s Quiet Press) to pin up the top at the shoulders. The fabric is gathered at the top into the pins so that there’s only enough free fabric to go around my arm and to fit my head through. Wear it belted. Ideally this should be worn over a tunic/peplos/chiton with a palla over it.. but in very hot weather it can be worn alone.

The second week was less hot but really there was only two days the whole war where I felt ok with wearing chemise+tunic+hood. Other than that I wander around in braies and a stola and didn’t even care what anyone thought.

Classes
I had a very Viking Pennsic. Almost all of my classes were about “Vikings”. I got two very good handouts about the archeological evidence for viking clothing and the archeological evidence of viking tablet weaving. I also picked up an “ok” handout about viking stitchery. Sadly the one Anglo Saxon class I attended was a waste of time. There was very little discussion of “what they did” and a lot of discussion about “What I [the teacher] do”. Things like “Well they had this motif on buckets so they must have put it on clothing”. I didn’t ACTUALLY facepalm but I thought about it very loudly.

Accomplishements
I bought 5 yards of light weight green linen and some decorative cotton thread from the merchants and sewed F a new tunic. I got it to “completely wearable” by the West Kingdom Party Tuesday night.. but I’m still working on finishing it. I think this is the first fully hand-sewn garment I’ve made for him. It’s also the first time I’ve attempted decorative seam treatments.

I learned a lot from this exercise. For this version I connected the pieces with a running stitch and then folded the seam allowances away from the first line of stitches and used a decorative running stitch to hold these down. I don’t love this. This method ends up taking 3 separate lines of running stitches along each seam line. Also, with only a single line of running holding the fabric pieces together it feels like the tunic will be very fragile. I plan to add another decorative stitch over the central running stitch.. but seriously.. at that point I will have put down four lines of stitches on every seam line.. that that seems needlessly complex. Now that I’m home I’ve decided to modify the sleeves to make them long sleeved instead of short sleeved. The linen is thin enough that I don’t think it -has- to be short sleeved and honestly I don’t think that sleeve length is accurate.

For the next all-hand-sewn tunic that I attempt I think I’ll use a version of the flat fold seam where the bottom fabric is off-set from the top fabric. The first seam is a running stitch and for the second I’ll use an overcast stitch.

Days at war = 13
Time to get there = 11 hours (2 hrs BART+2 hrs wait in airport+5 hrs flight+2 hrs drive to site)
Time to drive home = 11 hours (2 hrs wait in airport+1 hr flight+1 hr layover+5 hrs flight+2 hrs BART)
Number of blisters on my feet this year = 0!!!
Number of people camping with West Kingdom = 57
Number of classes I was interested in taking = Bazillion 24
Number of classes I actually ended up atttending= 5
Number of classes I took this year that really sucked = 3 (one just sucked, one the teacher never showed up 🙁 and one was listed online but didn’t end up in the site handout)(to make up for the suck I picked up a handout for a class I didn’t go to but where the handout sounded interesting)
Dollars spent in the marketplace = Ahem. No comment.
Number of books bought = 0
Number of yards of fabric = 5 (used to make F a tunic)(I probably should have bought more)
Number of loads of post-Pennsic laundry = 8
Number of naps taken at Pennsic= 2
Number of battles I saw = 1 (Field Battle)
Number of other camps I visited this year = 2 (Vlad’s and Gabriel’s Landing)

Shopping scores:
– a pair of Fibulae for Roman Stola (from Raymond’s Quiet Press)
– two pairs of medieval-oid shoes ($35/pair) for me and custom boots for the boy (From Bohemod)
– Free-standing warp weighted loom
– Knife to be used for Anglo-Saxon impression
– Medieval cinqifoil pins($6 each.. I got about 8 of them) 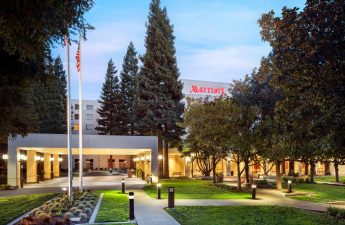 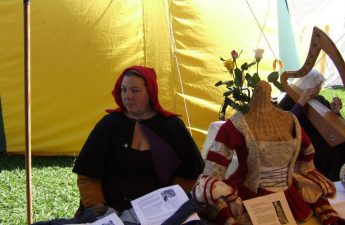 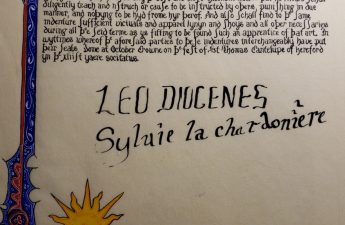