What I see:
White, probably linen, head thingy which appears to wrap around the back of the head and then ties (possibly a square knot) on the top of the head. The front has a flap which can either be forward or folded back.

It also kind of looks like a early form of a bonnet.

How have others reproduce it?
Heather’s Page: Flemish Kerchief
This method is missing the knot on top of the head. I like the look for some of the later Flemish paintings.. but this method doesn’t work for me for this project.

The Medieval Tailor’s Assistant has a pattern. I’m not satisfied with the pattern. It seems fantastically wasteful of fabric and frankly I’m annoyed by the lack of measurements on the pattern.

Racaire’s embroidery & needlework: Smurf Hood (Schlumpf Kopfbedeckung) episode II – I love the look of this one. It looks like a simple modification of the Medieval Tailor’s Assistant pattern. This eliminates the odd bias-cut bit and adds an interesting pleating to the back. But it has some odd seams that I don’t see in the images.. and although the pleating is interesting.. it’s another thing I don’t see in the inspiration images.

How I did it


Obviously the picture is not to scale. Use the measurements. The “cap” is 11″x11″ with an additional 5″ on the front for the “folded back bill” part of the hat.. and the tails are essential 10″ wide where they attach to the hat.. and 20″ 16″ long cut to be a triangle with the straight edge along the back of the cap.

I’m trying it out with just tucking the back.. I played with the hat for a while.. at the current size I just couldnt’ get the back to “tuck” in and hide my hair. I could make it larger.. or use pins.. but I think I’m going to go ahead and upgrade this to use a “direct smocking” fixed pleat like Racaire used.

– So last step the recreate, gather the back of the hat (~20 13 inches or so)(marked in light blue on my pattern) with 1/2 inch gathering pleat an then affix this with some kind of stitching (smocking, embroidery, whatever). I did two lines of white-on-white stemstitch pleatwork embroidery (as described here) across the tops of the pleats. 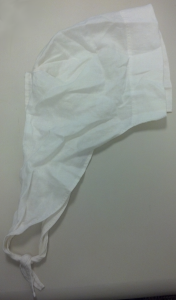 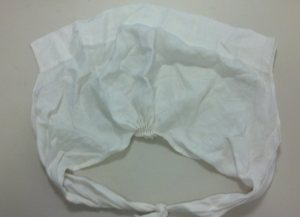 A Medieval Wardrobe: 15th century Tailed Cap
Nice looking hat here.. but not a lot of info about how she made it.

Sevenstarwheel: Late 15th Century White Hood or Coif – Transition Period / War of the Roses
I don’t understand how her pattern works. I think I need to just make one out of fabric and try it out.